The unit was re-designated 1 February 1990 as the 309th Military Intelligence Battalion, withdrew from the Army Reserve, and moved to the regular Army. The battalion transferred on 17 August 1990 to the US Army Training and Doctrine Command and the battalion was organized at Fort Huachuca, Arizona.

Since its activation as a training battalion, the 309th Military Intelligence Battalion has provided initial training for thousands of professional military intelligence Soldiers from a multitude of military occupational specialties and career fields, including all source analysts, ground surveillance radar technicians, human intelligence collectors, counterintelligence agents, interpreter/translators, MI officer courses, and US Air Force personnel through the Army Weather Support Course. In addition to training Soldiers, the battalion has provided subject matter experts to a number of commands and locations. The unit has deployed Soldiers in support of contingency and training missions worldwide to include Bosnia-Herzegovina, Kosovo, Hungary, Kuwait, Saudi Arabia, South Korea, England, El Salvador, Afghanistan, and North Africa. Additionally, the battalion has provided mobile training teams to US Army Forces Command and observer/controller augmenters to the Joint Readiness Training Center and the National Training Center.

Since its activation the 309th Military Intelligence Battalion has served both the Army and our great nation with distinction. Team Sentinel remains committed to continuing that service for the indefinite future. 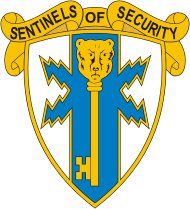